Home/News/A NEW FEMINIST DREAM is born in Jordan
Next

Only two weeks upon launching their platforms, feminist collective Takatoat has received over 40 applications for admission from women and girls who wanted to work with the collective.

The first community meeting was organized virtually in November 2020, with the presence of 28 new members of diverse backgrounds, with ages ranging from 15 to 41. The new members came from various cities across the country including Al-Zarqaa, Al-Salt, Ma’an and Al-Tafila, in addition to the capital, Amman. A number of women from neighboring countries such as Lebanon and Qatar also joined the meeting.

“To learn to say no”, answered one of the new members when she was asked about what her expectations of being a member of the collective are, while another, expressed her aspiration for a feminist discourse to reach different parts of the Kingdom and the region. Other members’ expectations included increasing the magnitude of visual, written, and heard feminist content and actively using intersectional, inclusive language in feminist advocacy that takes into account the various systems of oppression that women face, such as from misogyny, racism, ableism and classism. The new members emphasized that they believe in the importance of taking collective, organized action that aims to increase the feminist movement’s offline presence and ability to mobilize.

As Takatoat continued receiving up to 900 applications for admission and as lockdown permanentized, it was time to continue a series of online meetings to continue as a permanent feature of Takatoat reaching strategy. Two Other meetings were held in December 2020, and January 2021.

The new members were also introduced during the meetings to the annual international “16 Days of Activism against Gender-based violence” campaign. In 2020, Takatoat contributed to the international efforts by launching a campaign that addressed the unique struggles that women face due to the COVID-19 pandemic, such as an increase in physical/sexual/mental abuse due to being locked down at home with their abusers, and an increase in economic vulnerability and period poverty now due to an rising unemployment and a lack of access to necessary services. Two webinars were also organized by Takatoat under the campaign featuring feminist activists and women’s rights expert who further discussed the implications of the pandemic on the lives of women and girls across the kingdom.

An action plan was drafted to help integrate the new members into the work of the collective. With a clear plan in sight, the meetings were concluded on an enthusiastic note as new members expressed their excitement for becoming a part of Takatoat and engaging in feminist activism through it. While Takatoat -in turn- always looks forward to recruiting, welcoming and working with new members. 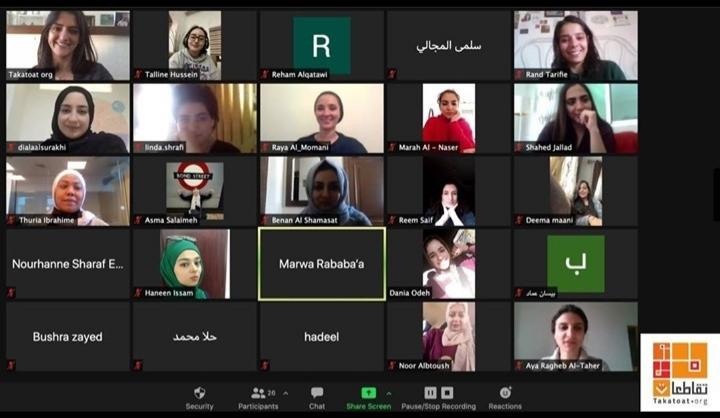 About the Author: admin2020